This Infrastructure Modernization project was completed for Skanska USA. A complete structural restoration of the 70-year-old station was performed to prepare the Substation for a new service life in the decades to come. Blackwood installed new structural slabs, footings and walls, and concrete stairs inside the old building to make ready for the new service… Read more »

Blackwood was contracted by Bozzuto Construction to install the Cast-in-Place, Podium Structure for a 114 unit, affordable housing complex. The project executed the DC Department of Housing and Community Development’s vision for a vibrant, mixed use development that promotes walkability and provides neighborhood-serving retail.

This Award-Winning Renovation project was performed for Clark Construction. Blackwood’s scope involved strengthening of the existing, 5-level, below grade structure and placement of new concrete at the above-grade, steel structure. The project was a recipient of AGC of D.C.’s 2019 Washington Contractors Award for Public/Government/Institutional work. Blackwood was also a recipient of ACI 2019 Concrete… Read more »

Blackwood was contracted by Clark Construction to install the Foundations, Areaway Retaining Wall, and Concrete Washes for the extension of the WMATA Parking Garage at Grosvenor-Strathmore Station. The Garage Addition will replace the parking spots lost to future development of the surface lot adjacent the garage.

This Renovation of a National Historic Landmark was performed for The Whiting-Turner Contracting Company. The project transformed the existing Franklin School Building into the new Planet Word museum. The entire Historic Façade of the existing building was preserved while Blackwood installed new foundations, columns, walls and decks, setting the stage for the exhibit space.

Blackwood was contracted by Bozzuto Construction to erect the 11-story, 179-unit, affordable housing building for seniors along the H Street corridor, adjacent to the existing Delta Towers. The project is one of Blackwood’s largest performed to date and was delivered on-schedule.

Blackwood was contracted by MCN Build to construct the foundations and structural slabs for the new Banneker High School Building. The project had a fast-track schedule and construction of the new school started while the original building was still under demolition.  Blackwood completed the project on-time.

This Award Winning Renovation project was performed for Coakley & Williams Construction. The existing, five-building school located in Mt. Pleasant was renovated and integrated with a new 74,000-sq-ft addition installed by Blackwood. The overall project’s schedule was reduced by nearly a year to just 14 months and was completed under budget and on time. The… Read more » 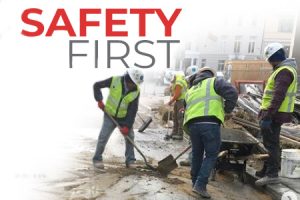 Our commitment to safety adds value to our clients and provides a safe workplace for our employees. Blackwood has a rigorous safety program which focuses on 4 key areas:

Our workforce of Superintendents, Foreman, and Skilled Craftsmen are mostly OSHA 30 certified. In addition, Blackwood is Rigging Certified and has Licensed Equipment Operators.